Men With No Names: by Justin Berry
Including a brief talk afterwards about the Waymaker Gallery


Stories, whether true or false, define our sense of reality. We use mythology to understand ancient cultures because the stories that people tell act as a framework against which we can determine their values and beliefs. In contemporary society the number of stories we tell, and are told, on a daily basis is staggering in comparison to any prior generation. Not only are there more stories but more ways of telling them. The photograph, once worth a thousand words, has become worth more. We see in a picture what might have been—as well as what the editor has added. Truth and fiction are no longer discernible from one another when the methods for telling them apart cease to function. Fact is quickly becoming an article of faith.

Justin Berry's work plays with the fragile space that exists between competing versions of the world. In Men With No Names he takes one story, told in four different ways, and tells it again. The story originated with Yojimbo, Akira Kurosawa's film about a renegade samurai who drifts into a small town being torn apart by rival gangs. By situating himself between them he brings their conflict out of the shadows and into the open, where they ultimately destroy one another. Every following version of the story exists in a different genre, including western, gangster, and fantasy. These films are not only remakes of Yojimbo, they are remakes of each other. The gangster film is as influenced by the western as it is by the original. Each movie is a copy of a copy. Men With No Names reveals the story in all of its forms as well as telling a fifth story, that of a nameless man entering a nameless town torn apart by rival gangs, saving it by pitting these two gangs against one another.

For this event Berry will be adding a special addition to Men With No Names, a ten minute long selection of movie trailers that have been rewritten and edited by YouTube users. Each of the trailers reimagines a well–known movie as belonging to an entirely different genre. The people who made these trailers were not making them as artworks, or as platforms for ideology, they were simply telling stories using the tools that have become ubiquitous to our culture, using prior narratives as the foundation for a new form. After screening Men With No Names, Berry will also be presenting a detailed walkthrough of his online project, The Waymaker Gallery, a fictional art space where both real and imagined artists create virtual works. The Waymaker Gallery is about re–imagining the way in which we describe the world, looking not only at the works that we create as artists but also the way that artworks linger in our experience when they are not being shown. 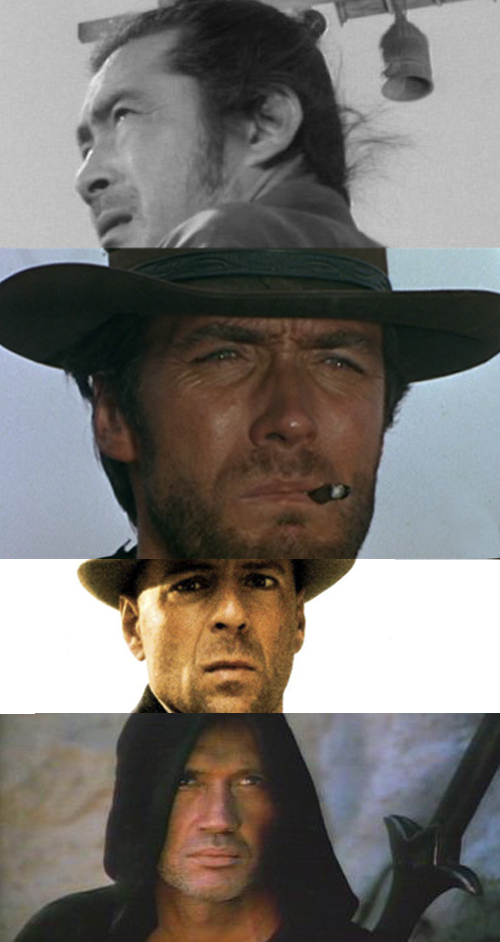